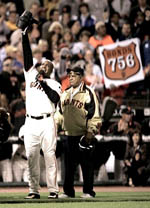 So my wish is now blown.  Here’s what I hoped: I wanted Bonds to hit his 754th home run and then retire  immediately.  It would have been a total class move in a career sorely lacking class moves.  He would have honored Hank Aaron by not surpassing his record home runs and we all would still have known he could hit plenty more.

Wouldn’t that have said a lot about the man?  Wouldn’t he have had the best of both worlds?  What would it have meant to his legacy?

This entry was posted on Wednesday, August 8th, 2007 at 4:39 pm and is filed under Uncategorized. You can follow any responses to this entry through the RSS 2.0 feed. You can leave a response, or trackback from your own site.