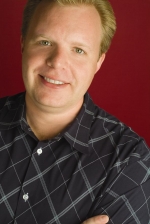 I’m sitting here in a hotel room in Chicago after attending a memorial for Paul Tilley today.

I hesitate to write about this because there has been so much written about Paul already on a number of ad blogs before and after his death.  I don’t wish to add any more fuel to that here.

But given that I write this blog, to say nothing could be construed in the wrong way.  So I will just say this.  Though Paul and I were not close friends, we saw each other regularly in our respective roles as creative leaders of our DDB offices.  Paul was big in every way.  He had a big voice, a big laugh and a big personality.  And he was just plain big.  He certainly was a great, motivating, insightful creative director to many.  To others, he was likely demanding and seemingly unreasonable.  When it comes to the highly subjective nature of creativity and his position, it simply comes with the territory.

Anyone who knew Paul had many stories to tell about him.  He was that kind of guy.  We heard a lot of those stories today.

This loss is so sad and senseless.  We all seem to seek rationality for what is ultimately a highly irrational act.  This world will miss you, Paul.

Perfection or the underdog?

For the past two weeks, I have been asked one question a lot:  Who do you like to win the SuperBowl, the Patriots or the Giants?

The truth is I often found myself somewhere between ambivalent and undecided — and I remained there right up until kickoff.  (Now, I did care about the score, since there was money riding on that in the office pool.)

Seriously, how was a person to decide?  A team on the cusp of perfection is pretty exciting.  But it’s New Englanders with their three SuperBowl wins in the last seven years.  There are a couple of World Series wins, finally.  And they’re the odds on favorites to win yet another NBA championship this season — albeit after a very long drought.  But enough already.  One city seriously contending for three major championships.  That’s about as bad as New York teams — and on a quick path to being more insufferable.  I’m not going to even mention the whole cheating thing earlier in the season.

So what about the Giants?  Well, damn, they’re from New York.  And any New York team is about as hard to root for as Notre Dame, or USC, or the Cowboys.  And Eli Manning was a bit of a prima donna when it came to San Diego drafting him.  But New England figured they had it so much in the bag.  The over confidence was too much.  I’ve always liked gap-toothed Michael Strahan calling it like he sees it.  And Eli Manning is a little brother — the last of three — and I can relate to that. 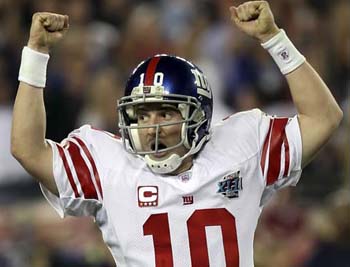 So, it’s a great game, back and forth.  The fourth quarter, less than a minute left and Eli Manning is in the grasp, about to go down.  Somehow he twists free, scrambles back, spins and off his back foot throws a pass on a rope that somehow David Tyree pins against his helmet and holds on to.
At this moment I jumped up shouting and ran a little lap around our small family room!  My family just looked at me.

Oh, and the ads were OK.