A little slice of Paradise 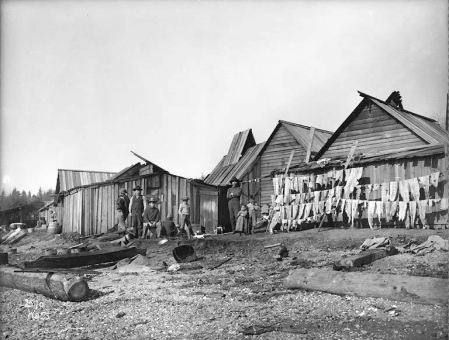 The article came out just a few weeks ago. Yeah, the New York Times did a story about the island I call home — Bainbridge Island.  It reminds me of when Seattle was voted “best place to live” by Money, or some magazine like that.  And because the list can’t be the same the next year, you wait for your fall from grace.

We bought our house on Bainbridge in 2007 and moved here full time just last summer.  So we’re real newcomers.  Maybe if our kids live here their whole lives (yeah, that’s likely) then maybe they’ll some day be considered “Bainbridge old-timers.”

Our friends can’t fathom why we would move over here after 20  years of living in the city.  Well, here’s one:  my house today is in all likelihood on the beach directly behind where these old cabins stood 103 years ago. Couldn’t afford that in the city.  The schools are among the very best in the state. And the commute people can’t imagine doing? Yeah, I spent it tonight enjoying a cold Bud Light with two friends after a really long week.  No driving.

But now I’m catching a bit of grief from friends.  They suggest that perhaps we’ve got a really good PR campaign going on behalf of the Island.  (Not true, though you could start a pretty impressive ad agency on Bainbridge just based on the number of our ilk who live over here.)   What I can’t figure out is why more people aren’t moving here.  And though I would love to enjoy Island life with even more friends, I suppose I’m a bit like a lot of people who move here and want to close the door behind them and not let anyone else move over.  Actually, that’s not true.