Trying to get a little perspective

Since Grace was born just over 10 years ago, I’ve been writing letters to her.  And when her brother, Owen, was born, I began writing letters to him, too.  At first it was about every four months or so — then about every six months.  I don’t actually send the letters, I save them in a book for when they are adults.  I suppose it’s like keeping a journal about both of them, but the idea of writing in it all the time is daunting.  But this way, I can look back over the most recent months and muse about Halloween costumes, lost teeth, and the crazy drawing only kids can come up with.

But here we are in the midst of economic turbulance (catastrophe?) unlike anything we’ve ever seen before.  So I find it strange that in those 12 months, I haven’t written any letters to my kids.

Intellectually, I realize it’s probably amazing material.  If I were Grace or Owen reading these letters 20 years from now, I’d really want to know what we were coping with in these times and how it touched us as a family, as well as our community.  But somehow I fear that I don’t have enough perspective.  My mood swings with the news of the day.  I listen to Kai Risdal sparingly on NPR because he bums me out.  I feel good when the market is up (like yesterday) and morose when in drops (which it did today, yet somehow I don’t feel too bad because it was up so much yesterday).  The implications of monthly unemployment numbers weigh heavily on me.

I want to chronicle this interesting, scary, daunting — and hopefully reformative — time for my kids, but I’m afraid I’d look back on anything I write as being overly melodramatic.

And maybe I should just get over it.

If you like wine, check out this widget from for American Winery. It was developed by Qponix — run by a couple of friends of mine from Whitman College and operating right out of our favorite rock in the middle of the Puget Sound … Bainbridge Island.

Curious to hear what you think. 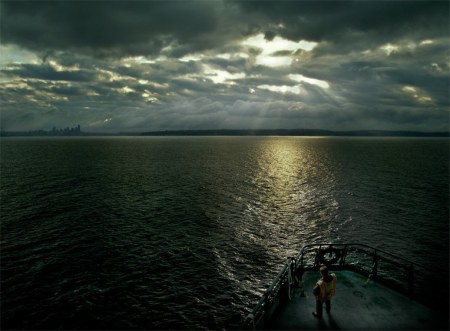 Practically every morning I ride the ferry over to Seattle with my friend and co-worker, Michael Nalley. Fairly often, he’s on his computer massaging a photo he’s taken recently. I often watch with amazements as he does this. Why? because I see a lot of the same things he does (Bainbridge Island ain’t that big, and several of his photos are things I’ve seen many, many times). The truth is that he sees them and captures them in a way that makes me see them again in a new way. That may not be the exact definition of “art” but it works for me.

Check out his work at www.michaelnalleyphotography.com.