Not too long ago I wrote a post about graffiti and the role it plays in our society.  I was pondering at what point it is simply vandalism, and at what point does it rises to the level of art and commentary that is beneficial to our society.  I understand that’s a highly subjective call, especially when balanced against the rights of property owners.

But on this subject, I really loved this work by Paul “Moose” Curtis.  He’s a graffiti artist that was brought to the project by my friends at DDB San Francisco to publicize their client Clorox’s new Greenworks product.

As an advertising creative — and an artist — I come to the same conclusion: This work is brilliant.

Pondering the legitimacy of graffiti, stickering and such …

I was out and about in the city this weekend with my kids, trying to give their mom a bit of a respite for Mother’s Day.  As we passed a large concrete wall, both of my kids started commenting on the “evil graffiti.”

They said this with a bit of mock horror and told me they learned it from one of their classmates. Now, undoubtedly, these classmates have been influenced by their parents who surely see the defacing of private/public property as the issue.

But my kids have also been to my office where various walls are adorned with the work of a handful of urban artists.  We love the energy it brings to the office.

But all of this got me thinking about where the line is for me.

There was Keith Haring who, in the early 1980s, became know for drawing with white chalk on the black paper covering the unsold adspace in the subways of New York. Haring was fascinated with the idea of making art that was not elitist, but made and displayed in public for all to see and love (or not). 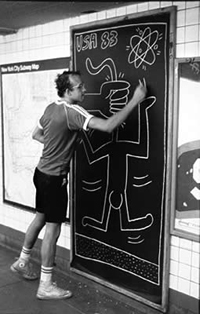 Another of my favorite artists is England’s Banksy. His works are full of social commentary and I’m fascinated with the way he uses stencils to create pieces that are at once both thought provoking and wonderful. Interestingly, nobody really knows who Banksy is in real life — though there is much speculation.  He chooses to remain anonymous because what he does is, at the core, still illegal. 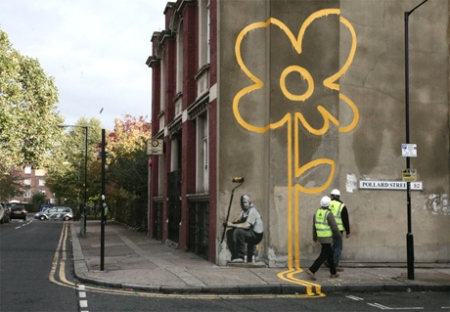 Banksy has been a big influence on one of my other favorite urban artists, Shepard Fairey. While at Rhode Island School of Design, Fairey made a silkscreen from an old picture of Andre the Giant.  It was called “Andre the Giant has a Posse.”  Instead of spray painting, he created artwork that could easily be translated into posters and stickers so that people could easily be copied and replicated.

He refined the image over time and the result is that armies of young people ran off their own copies of this and plastered Obey Giant stickers and posters all over the country and beyond.  All of this has made Fairey a well-known and successful artist (both in fine art and commercial art).

And he’s so legitimate as a social commentator that when he created a poster in support of Barack Obama, it was enthusiastically embraced by his campaign.  In fact, it was a badge of honor.

So, stickers.  Shepard Fairey got famous with them. Snowboard brands and ski companies have built up their slope-cred by using this ultra-cheap advertising alternative.  When does the value of the message outweigh the defacing of private property (if, indeed, you see it as defacing)?  How about this example: 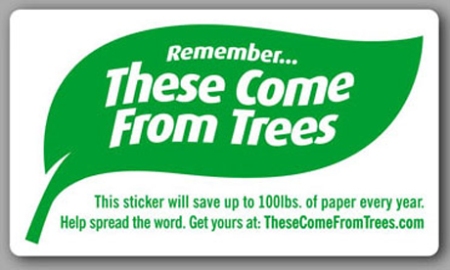 I saw these stickers one day while I was using a restroom at a business. It struck me as really smart in that it got me thinking about how much paper I was going to use just before I actually pulled the lever. It must work.  They claim that each of these stickers saves 100 pounds of paper.  That’s good, right? But do I have the right to put the 100 stickers I ordered off of their website and place them on paper towel dispensers as I encounter them? Is it OK because it makes people think a little more?  Or because there’s nothing really offensive about the stickers?  What do you think?  When does stickering become OK?  When is graffiti OK?  Tell me.